Education: an investment in our future. 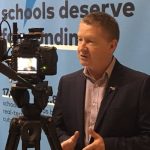 As the new school year begins NAHT National Secretary, Rob Kelsall argues that The Chancellor should not allow education to be pushed to the back of the queue.

NAHT has been campaigning for more cash for schools in England, Wales and Northern Ireland for more than eighteen months. And we’re not alone. Other unions, and professional bodies in education have joined the cause, including some very vocal parent groups like Fair Fund All Schools and Save Our Schools UK.

Its been the addition of parents’ voices that has made all the difference to our campaign. Once upon a time, parents would have criticised school leaders for making hard choices to cope with the cuts to school budgets. But perhaps because the impact of the cuts is so clear to everyone, parents and school leaders are standing shoulder to shoulder. As I’ve travelled the country, I’ve met thousands of head teachers and parents campaigning to reverse the cuts. I get my energy and inspiration from their determination and spirit to win through. That determination has forced politicians to listen and we’ve made our mark. However, there’s lots more to do and many more people are getting involved in the campaign..

A big success of the school funding campaign is that we have established that school cuts are indeed a fact. Many other reputable organisations have backed up what we’ve been saying with their own research.You know you’re onto something when the influential Education Policy Institute agrees with you. They’ve reported that the proportion of local authority maintained secondary schools in deficit has nearly trebled. They said that over sixty percent of these schools spent more than their income in 2016-17.

Whilst this report focused on maintained schools, a national report by a firm of accountants confirmed that 55% of the 450 academy trusts that they had audited up to August 2017 were in deficit.

The Institute of Fiscal Studies – another well respected body in this field – has just said that between 2010 and 2018 school funding actually fell by around 8% in real terms.

NAHT’s own survey of members showed that 71% of them were expecting to have to set a deficit budget in 2019/20 and 79% by the following year. In this year, 80% had made cuts to teaching assistant roles and 37% had cut teaching roles in order to secure a balancing budget.

For those who continue to deny that there’s a crisis in our schools then the latest workforce survey carried out by the DfE for me says it all. Compared to last year, England’s schools have 5,400 fewer Teachers, 2,800 fewer teaching assistants and 2,600 fewer support staff despite the fact that our schools have 137,000 more pupils to teach.

Our maintained nursery schools are on a cliff edge. If no long term funding solution is found soon, then the 400 schools which remain, face closure as their transitional funding runs out in less than two years. Our nursery schools are the jewel in the crown of the education service. A staggering 98% are judged Good or Outstanding. They provide critical education and care in the most deprived communities. We should be opening more maintained nursery schools, not closing them. Crisis what crisis?

Our aims are quite simple;

The evidence is irresistible.

And the government appears to acknowledge that they have work to do to regain the confidence of voters. At the Conservatives Spring Conference, Theresa May said: “…some people question our motives. They wonder whether we care enough about our NHS and schools.” She also said: “…we might think that the public’s doubts about us are unfair. But they are a political fact which we must face up to.”
Damian Hinds has also said that school funding is ‘tight’.

However he was reprimanded by the UK Statistics Authority for claiming that “real-terms funding per pupil is increasing across the system”. But of course, for school funding to truly rise, Phillip Hammond must start taking notice.

NAHT has written to The Chancellor to say that: “Education is often allowed to fall behind matters of health, social security and policing as these are headline issues with the electorate. However, we believe that continuing to push education to the back of the funding queue is damaging to the nation. The children in the education system today are the generation that will ensure the United Kingdom is a success in a post-Brexit world. To fail to provide them with the education and support they need will short-change the nation in the long term.”

In the meantime, NAHT are full square behind the ‘WorthLess?’ school funding group who are organising a group of 1,000 school leaders to march on Downing Street on 28th September. I hope to see many of you there on the day. It’s incumbent on all School leaders to play their part.

If we can’t get school funding on the Treasury’s radar with a polite letter, then we’ll try something a bit more public.

Education should never be seen as a burden on the taxpayer, It’s an investment in our nations future.

After all, pupils only get one chance at school, and we cannot let them down.

The Perils of the Quick Fix Culture